Home » TYPES » Bulbs » Merwilla plumbea bulbs in winter
Back to Category Overview
Total images in all categories: 11,538
Total number of hits on all images: 6,617,318 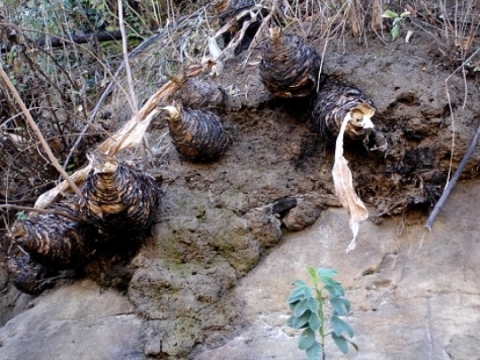 Although half or more of the large bulb of the blue squill is visible above-ground, the cartilaginous outer tunic and papery scales usually protect the plant effectively against fire and other risks. A large quantity of effective roots anchors the base of the bulb firmly in the soil. The bulbs of Merwilla plumbea multiply by gradual division on the maturing plant, until clumps of about five to ten of them may all flower in the same season.

The six to nine semi-erect leaves that grow from the top of the bulb are lanceolate with entire margins. They are hairless or velvety from fine hairs. Leaf colour is pale green to blue-green, sometimes with some maroon along the margins or elsewhere on the leaves. There are distinctive veins along the leaf surfaces. Only a few dry leaves from the previous summer can be seen lying around these bulbs, as well as a couple of flower stalks.

The species is quite variable across its distribution. Although the plant material is toxic, it has been used medicinally for a variety of ailments. The bulb has been used as a soap substitute and in making soap (Manning, 2009; www.plantzafrica.com).