Home » TYPES » Bulbs » Merwilla plumbea flowers
Back to Category Overview
Total images in all categories: 11,662
Total number of hits on all images: 6,774,692 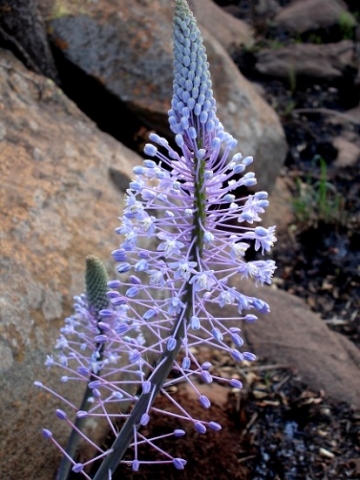 Merwilla plumbea is a bulbous perennial. The green or amethyst flower stalk curves gracefully, as a snake might hold its head suggested by the Afrikaans common name of blouslangkop. The cylindrical raceme carries many small blue or mauve flowers on long, straight pedicels. The flowers are star-shaped with white filaments, but also variable in colour and size.

The species is distributed in the east of South Africa. Coastal distribution also occurs in parts of the Eastern Province and southern KwaZulu-Natal.

A grassland plant, M. plumbea often grows among rocks where it usually, as here, survives the winter grass fires that sweep over this terrain far too regularly. The species is considered to be near threatened in is habitat early in the twenty first century (Manning, 2009; www.plantzafrica.com; http://redlist.sanbi.org).