Home » TYPES » Bulbs » Merwilla plumbea, blouslangkop
Back to Category Overview
Total images in all categories: 11,662
Total number of hits on all images: 6,774,690 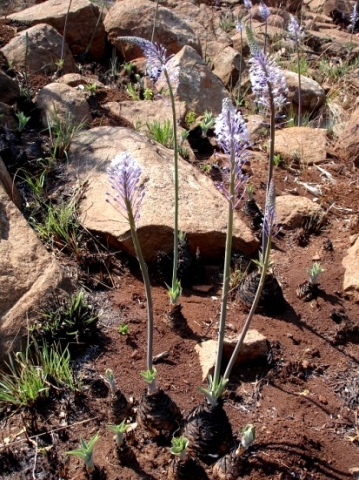 The leaves and flowers of Merwilla plumbea sometimes arrive concurrently, at other times the one appears slightly before the other. Annual growth has started from the bulbs in picture, as well as in the grass around that had burnt during the previous winter. This growth may result from little or almost no rain in spring, when temperatures start to rise.

The small bulbs in this stand are delivering leaves only; the large ones have flower stalks as well. The stalk grows from 20 cm to 1 m in height. Commonly known as the blue squill or in Afrikaans blouslangkop (blue snake-head), the species has undergone a name change from Scilla natalensis not too long ago.

Only one other Merwilla species occurs in South Africa, viz. M. dracomontana, a dwarf species named for the Drakensberg. Both local species are found in the Drakensberg and the Malutis of Lesotho (Manning, 2009; www.plantzafrica.com).