Home » TYPES » Bulbs » Melasphaerula graminea
Back to Category Overview
Total images in all categories: 12,081
Total number of hits on all images: 7,379,203 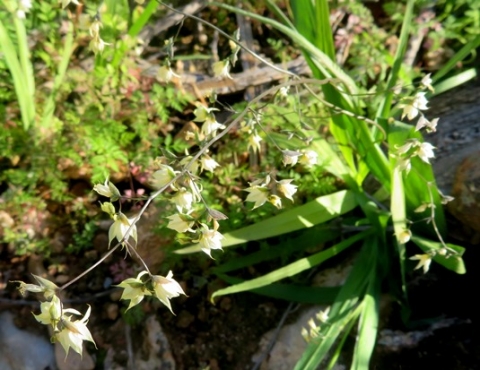 Melasphaerula graminea, commonly known as fairybells, in Afrikaans as feeklokkies (little fairy bells) or baardmannetjie (little bearded man) and previously as M. ramosa, is a cormous perennial growing deciduous above-ground leaves and flowers annually to heights around 1 m. The bell-shaped corm, covered in concentric layers of a woody to papery tunic, roots from its flat base.

The generic name, Melasphaerula, is derived from the Greek words melas meaning black, sphaira meaning sphere and -ulus meaning diminutive; the significance of the small black sphere is not known. The specific name, graminea, is derived from the Latin work gramen meaning grass and -ium indicating resemblance, i.e. grass-like.

The species distribution is in the Northern Cape and the Western Cape, from Namaqualand to the Cape Peninsula and eastwards to around George.

The habitat is moist, sheltered and shady spots among scrub, rocks and trees in the winter rainfall region. The species is not considered to be threatened in its habitat early in the twenty first century (Vlok and Schutte-Vlok, 2015; Manning, 2007; Le Roux, et al, 2005; Leistner, (Ed.), 2000; Andrew, 2017; iNaturalist; http://redlist.sanbi.org).