Home » TYPES » Bulbs » Massonia pustulata
Back to Category Overview
Total images in all categories: 9,889
Total number of hits on all images: 4,583,291 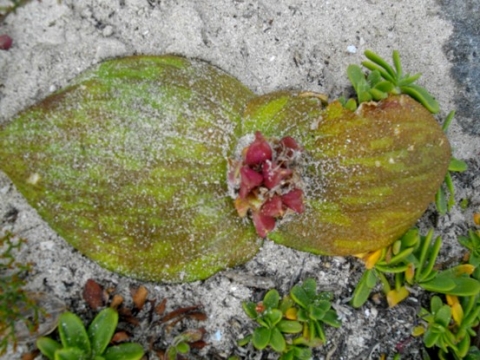 Several Massonia species are called hedgehog lilies. The ground-level flower cluster in the form of an umbel appears in winter or early spring between the two prostrate leaves. Long-filamented, erect stamens topped with yellow anthers protrude conspicuously. It is this flower shape that reminds of a hedgehog. Shorter narrow petal tubes, rich in nectar for the benefit of the needed bees and butterflies, envelop the stamens at the base.

Massonia pustulata has white or cream flowers that fade to pink, as well as a less common form that starts off pink. The specimen in picture was photographed in the De Hoop Nature Reserve in beach sand after flowering. The pinkish, three-angled fruits have already formed. Their round seeds will be released later.

The plant is successfully grown from seed and often planted in pots (Privett and Lutzeyer, 2010; Manning, 2007; www.alpinegardensociety.net).