Home » TYPES » Bulbs » Massonia depressa anthers
Back to Category Overview
Total images in all categories: 9,913
Total number of hits on all images: 4,614,201 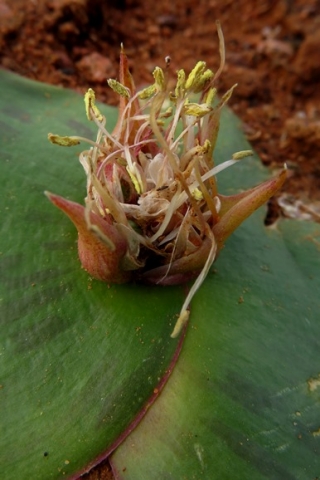 Some floral details of Massonia depressa are revealed here. There is pale yellow colouring on the narrowly oblong anthers folding around the filament tips and pointing in the same direction as the filament.

There are six stamens per individual flower in the inflorescence, prominent in a whorl far above the perianth tube. The stamens are free above, probably joined at the base.

The fleshy, triangular outer bracts around the inflorescence curve out to acutely pointed tips. They are finely marked pinkish on a dull, pale brown, slightly translucent surface, their margins curving in.

The white tepals of individual flowers are fused below, ending in pointed tips that curve out (Manning, 2007; Leistner, (Ed.), 2000).