Home » TYPES » Bulbs » Massonia bifolia
Back to Category Overview
Total images in all categories: 9,915
Total number of hits on all images: 4,614,895 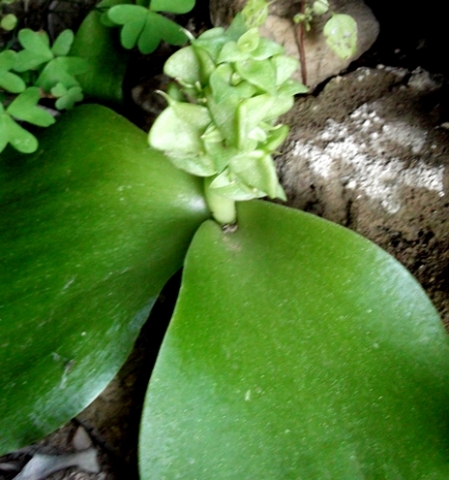 Massonia bifolia, commonly the pagoda lily and previously Whiteheadia bifolia and Eucomis bifolia respectively, is a perennial geophyte growing an inflorescence that reaches heights from 8 cm to 20 cm.

Two large, prostrate leaves appear annually, broadly ovate and green with entire margins and usually longitudinal lines across their surfaces. The leaves grow one over the other, opposite each other or angled in positions from nearly opposite to close together as in the photo. The leaves sheathe the flower stalk. The leaf dimensions are 30 cm by 20 cm.

The crowded, many-flowered inflorescence is in the form of an erect spike. The pale greenish to white flower is cup-shaped, subtended by a pointed, pale green bract that becomes longer than the flower. The flower reaches 1 cm in diameter.

Blooming happens from midwinter to mid-spring. This photo was taken in October in the Gifberg.

The species distribution is from Clanwilliam to Namaqualand and Namibia. The habitat is rocky places on slopes where the plants grow in shade. The species is not considered to be threatened in its habitat early in the twenty first century (Le Roux, et al, 2005; Bond and Goldblatt, 1984; iNaturalist; http://redlist.sanbi.org).