Home » TYPES » Bulbs » Ledebouria species with undulating leaf margins
Back to Category Overview
Total images in all categories: 11,923
Total number of hits on all images: 7,173,483 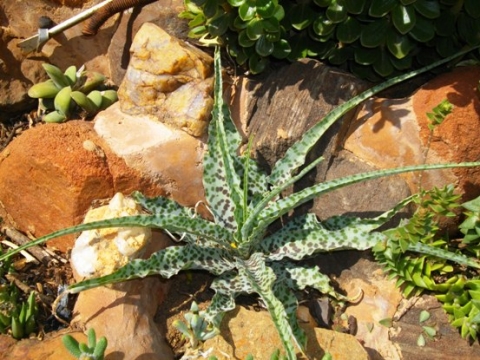 Ledebourias abound in the summer rainfall grassland in the east of South Africa, especially in Limpopo and Mpumalanga. They are bulbous plants of the Hyacinthaceae family. About 50 species of the spotted squill plants comprise the Ledebouria genus, occurring in Africa and India; 40 of them in South Africa. The leaves are often spotted, but identification with certainty in some cases requires inspection of the bulb and flowers as well.

This spotted leaf plant resembles Ledebouria socialis which has some form variations, but not the leaf margin undulations seen in the photo. L. ovatifolia that grows in the Eastern Cape and up to tropical Africa does occur in the Magaliesberg where this plant was found. L. revoluta that grows from the Western Cape to Limpopo is highly variable in appearance and may be a possibility in this case. L. floribunda, widespread in the region, but may represent a larger plant, is another possibility (www.pacificbulbsociety.com; Lowrey and Wright, 1987).