Home » GENERA I-L » Ledebouria » Ledebouria ovatifolia
Back to Category Overview
Total images in all categories: 12,061
Total number of hits on all images: 7,359,954 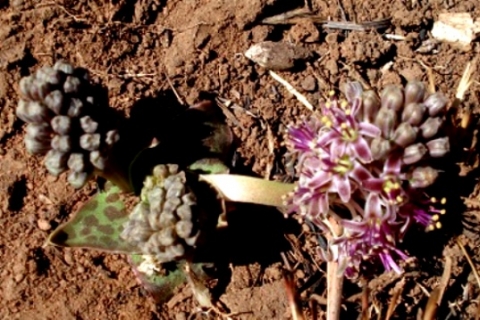 The flowers of Ledebouria ovatifolia are borne on erect scapes by the plant in picture. The lower part of the flower stalk is sometimes sprawling flat on the ground, curving up near the densely flowered raceme. The flowers and later the fruits are probably heavy to bear for the stalk when fully developed. There may be more than one flower stalk per bulb, also in one specimen in picture.

The greyish buds show a little purplish corolla colour, faintly among green bands on the closed, lower surfaces of the tepals. The buds are flat-topped or even slightly concave on top. The open flowers are star-shaped, the six tepals tapering abruptly to blunt tips. The corolla colour is brownish purple here with nearly white tepal margins. The tepals recurve; the more brightly coloured purple filaments present their globose, yellow anthers well above the corolla.

This plant was seen in the Melville Koppies Municipal Nature Reserve in Johannesburg during August (iSpot; Van Wyk and Malan, 1997).