Home » TYPES » Bulbs » Ledebouria marginata, young and old flowers
Back to Category Overview
Total images in all categories: 11,912
Total number of hits on all images: 7,163,205 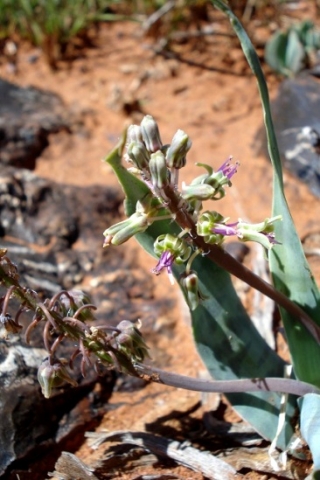 The spacing of flowers of Ledebouria marginata on the flower stalks can be seen on the two racemes in picture. The one on the left has finished flowering, the fruits are forming on the now pendulous pedicels that have changed colour to dull purplish brown. The pedicels are quite a bit longer here than the ones on the younger raceme. The raceme on the right holds its unopened buds erect and the open flowers pointing outwards horizontally.

There is green colouring on the outside surfaces of the tepals of the still closed upper buds as well as on the inside surfaces of the heavily curled up tepals of the open flowers. See how these pedicels are still white and straight. The anthers are already peeking out of the half opened bud on the left, while on the open flowers the lilac filaments extend far beyond the tepals.

Maybe someone has already had the patience of watching the pollination here: At what stage does it occur, who does it and how? The pollen and stigma seem quite far removed in the open flower from where nectar might be waiting.