Home » GENERA G-H » Hypoxis » Hypoxis colchicifolia
Back to Category Overview
Total images in all categories: 10,696
Total number of hits on all images: 5,357,199 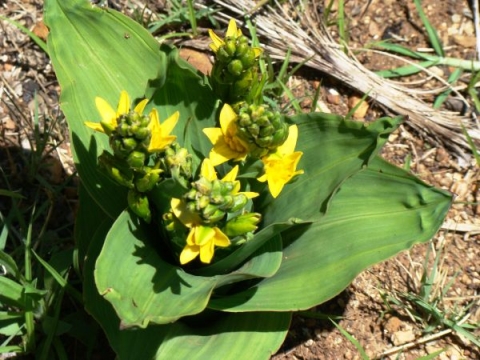 Hypoxis colchicifolia, the broad-leaved hypoxis or in Afrikaans the breëblaargeelsterretjie, is a cormous plant or geophyte reaching heights around 50 cm.

The plant has an ample quantity of broad leaves that wrap around each other and the multiple flower stalks. It is not as hairy as some of its relatives in the genus. Racemes of bright yellow flowers appear in spring and summer.

This plant grows in the Eastern Cape, Free State, KwaZulu-Natal and Mpumalanga, as well as in Swaziland.

Its habitat is summer rainfall grassland and open woodland. The species is not considered to be threatened in its habitat early in the twenty first century.

Medicinal and related uses of the large globose corm include the treatment of impotency, barrenness, hysteria, the concocting of love potions and remedies for countering bad dreams. The plant may cause delirium if ingested but is also used in the treatment of the condition (Manning, 2009; Van Wyk and Gericke, 2000; http://redlist.sanbi.org.za).