Home » TYPES » Bulbs » Hesperantha pauciflora flower and bud
Back to Category Overview
Total images in all categories: 9,180
Total number of hits on all images: 4,099,334 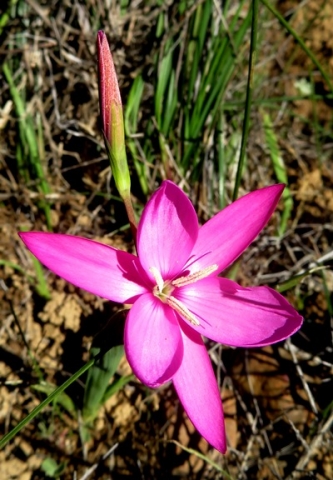 The two to four pink to purple or sometimes yellow flowers of Hesperantha pauciflora grow in a spiralling spike, the flowers pointing up. Flower diameter is 2 cm to 2,5 cm. The two soft green bracts clutching the flower base have similar tips, but are unequal in size.

The outer surfaces of the tepals are red, the bud in the photo brick-red and veined. The inner three tepals of the open flower are slightly broader and shorter than the outer three, their tips concave on the inner surface.

The three stamens are erect, their long, narrow anthers whitish and coarsely granular to fluffy. The three style branches are long and thin. The nectar-bearing flowers are fragrant, particularly in the afternoon when they open. Pollination is done by bees, flies and beetles, maybe also other insects.