Home » GENERA G-H » Hesperantha » Hesperantha pauciflora
Back to Category Overview
Total images in all categories: 9,586
Total number of hits on all images: 4,312,536 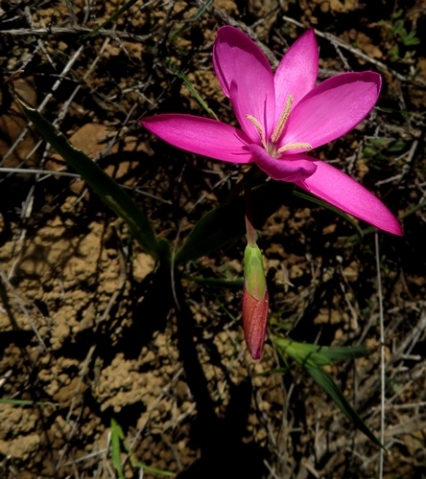 Previous
Image 7 of 15
Next

Hesperantha pauciflora, the pink evening-lily and previously Tritonia pauciflora, is a perennial growing annual above-ground leaves and flowers to heights around 10 cm to 15 cm. The summer dormant geophyte grows from a perennial, flat-based corm covered in a woody coat.

The species distribution is in the southwest of the Northern Cape, southern Namaqualand to the Bokkeveld escarpment. The photo was taken at Matjiesfontein near Nieuwoudtville.

The habitat is mainly renosterveld in clay or sandstone derived soils. The plants may be found solitary among the renosterbos or scrub, also in large stands in abandoned fields previously ploughed. The species is not considered to be threatened in its habitat early in the twenty first century, as it is well adapted to the previously disturbed farmland (Manning and Goldblatt, 1997; Leistner, (Ed.), 2000; Eliovson, 1990; iNaturalist; http://pza.sanbi.org; http://redlist.sanbi.org).