Home » GENERA G-H » Hesperantha » Hesperantha falcata
Back to Category Overview
Total images in all categories: 9,579
Total number of hits on all images: 4,304,099 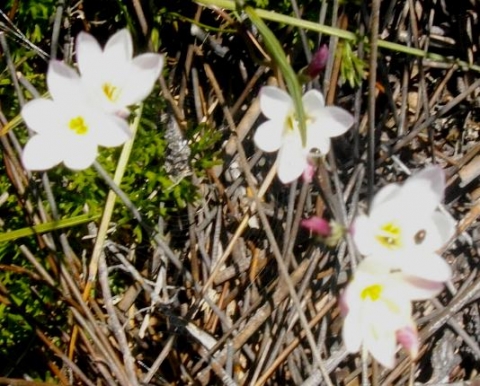 Hesperantha falcata, in Afrikaans known as the bontrokkie (little colourful dress), is a geophyte growing to heights ranging between 6 cm and 30 cm. About four leaves grow to half the height of the flower stalk. They are sickle-shaped or sword-shaped, curving or straight. Falcata (Latin) means sickle-shaped; there is also a kind of curved sword known as a falcata.

The flower tepals are white or yellow on their inner surfaces facing up, red to brown on the outer surfaces, not visible here. The anthers may be white or yellow. The yellow form only occurs between Caledon and George.

This plant was photographed in November on Table Mountain. The overall species distribution ranges from Nieuwoudtville to Port Elizabeth, most prevalent in the Western Cape. The plants grow on sandstone or shale slopes. The species is not considered to be threatened in its habitat early in the twenty first century.

Many of the 80 species of Hesperantha grow in the South African winter rainfall area, 27 among the fynbos (Manning, 2007; Bean and Johns, 2005; iSpot; http://redlist.sanbi.org).