Home » TYPES » Bulbs » Hesperantha cucullata
Back to Category Overview
Total images in all categories: 8,963
Total number of hits on all images: 3,974,033 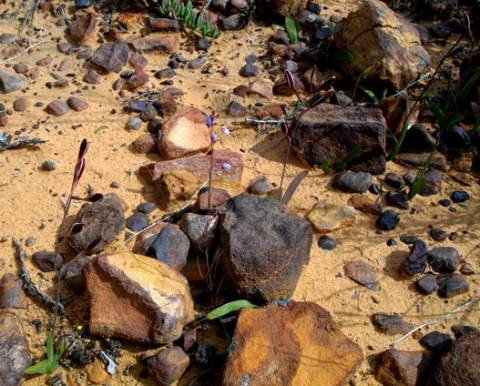 In habitat at Kagga Kamma, these delicate Hesperantha cucullata geophytes grow in exposed conditions among bare rocks in sandy soil, reaching heights of 15 cm to 30 cm. They are also found in shale ground in western Karoo renosterveld of the Bokkeveld escarpment and the Biedouw Valley, around towns like Nieuwoudtville and Clanwilliam.

It is possible to mix the plant up with Geissorhiza ovata of a closely related genus of bulbous plants. That plant also has reddish on the outside of its buds, while both are white on the inside surfaces of their six tepals. It helps that G. ovata leaves are oval and spread on the ground or close to it, not erect and sword-shaped as those of H. cucullata.

H. cucullata is not considered to be threatened in its habitat early in the twenty first century (Manning and Goldblatt, 1997; Manning, 2009; www.pacificbulbsociety.org; www.redlist.sanbi.org).