Home » TYPES » Bulbs » Hesperantha baurii subsp. baurii
Back to Category Overview
Total images in all categories: 9,138
Total number of hits on all images: 4,082,804 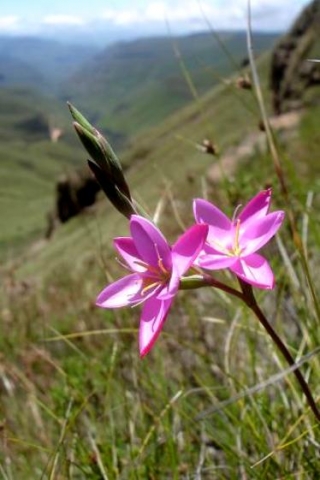 Hesperantha baurii subsp. baurii is a cormous perennial reaching heights around 50 cm, although usually much smaller. The corm has a flat base and is covered in hard layers of a woody tunic. Four narrow, linear leaves are grown, two at the base, the others up the flower stalk.

A spike of pink six-tepalled flowers appears from midsummer to early autumn. The corolla tube is nearly 1 cm long, the tepals spreading to a diameter of up to 3 cm. Flowers are open during daytime.

The stamens diverge in the salver-shaped corolla into the cream-coloured oblongs of the thin anthers. The style has three long white stigma branches, taller than the stamens.

The species is distributed in the east of the country from the eastern Cape to Limpopo and from the coast to the Drakensberg, also in Lesotho.

The habitat is grassland. H. baurii subsp. baurii has a stable population in its habitat early in the 21st century (Manning, 2009; http://redlist.sanbi.org).