Home » TYPES » Bulbs » Hesperantha bachmannii
Back to Category Overview
Total images in all categories: 9,121
Total number of hits on all images: 4,075,195 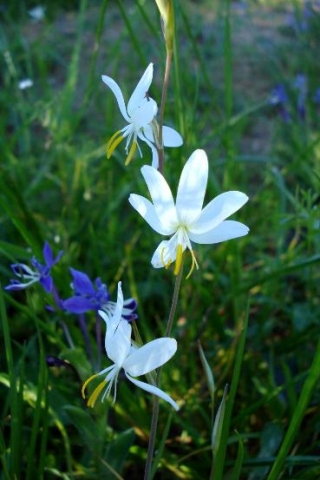 Hesperantha bachmannii is a slender, cormous perennial reaching heights up to 30 cm. The leaves are narrow and soft-textured.

The flowers have inspired common names like ballerina and in Afrikaans aandblommetjie (little evening flower) or witrokkie (little white dress). The sweetly scented, nodding white flowers open in the afternoon. They are 2 cm in diameter, spirally arranged in a short spike. The corolla tube is curved while the tepals recurve abruptly at the corolla mouth.

The long, thin, brownish yellow anthers and the three thread-like, white stigma branches can be seen, positioned well away from the corolla mouth. Flowering happens from midwinter to early spring.

The species occurs in the Northern Cape, the Western Cape and the Eastern Cape. The photo was taken during August north of the Clanwilliam Dam.

The habitat is mostly clayey slopes in renosterveld. The species is not considered to be threatened in its habitat early in the twenty first century (Manning, 2009; Vlok and Schutte-Vlok, 2010).