Home » TYPES » Bulbs » Freesia occidentalis colour variety
Back to Category Overview
Total images in all categories: 11,241
Total number of hits on all images: 5,956,276 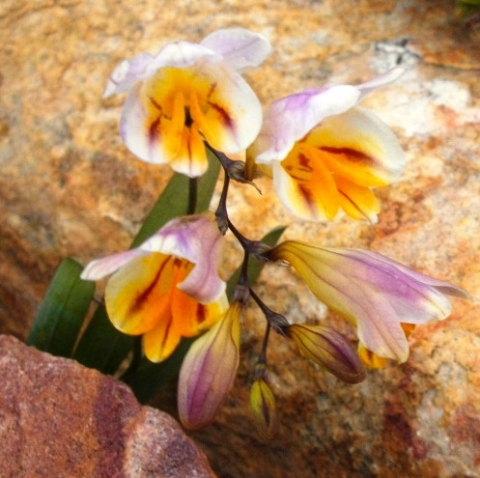 Much colour variation is present on these flowers thought to be Freesia occidentalis. The zigzag shape of the stalk of the flower spike is conspicuous in this photo, as well as purplish areas on the outside surfaces of the tepals.

The flowers were seen at Kagga Kamma in September. The other two photos of F. occidentalis shown in this Album were also taken here, the variable plants all growing together in a small area.

By appearance the flowers were thought to be F. fergusoniae, but that plant grows by the coast from Heidelberg to Mossel Bay. F. speciosa flowering in the same season as F. occidentalis, is distributed more easterly from Montagu into the Little Karoo. F. caryophyllacea has yellow markings on its lower tepals, but flowers late in autumn and early winter (Bond and Goldblatt, 1984; iSpot; www.pacificbulbsociety.org; www.biodiversityexplorer.org).