Home » TYPES » Bulbs » Freesia leichtlinii subsp. alba
Back to Category Overview
Total images in all categories: 11,241
Total number of hits on all images: 5,956,206 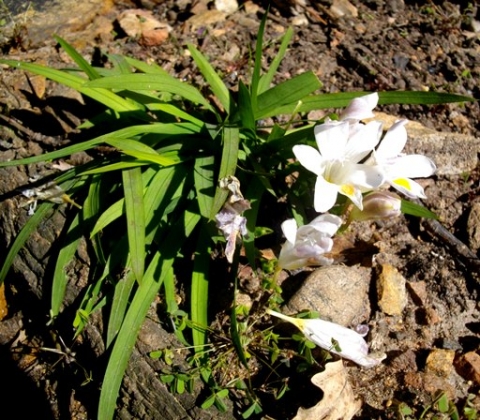 Freesia leichtlinii subsp. alba, previously known as F. alba, is an erect plant of 12 cm to 40 cm in height. It grows an annual fan of sharp-tipped, ridged, sword-shaped leaves from a perennial corm. Tiny cormlets that can become new plants grow in the axils of the branched flowering stem.

The distribution of the species is coastal from around Hermanus to Plettenberg Bay, more established east of Stilbaai. This plant was photographed in disturbed veld near Genadendal early in July.

The habitat is coastal sandy soils and stony areas. The subspecies is considered to be near threatened in its habitat early in the twenty first century due to farming, other human activities and the proliferation of invasive alien plants (Manning, 2009; Bond and Goldblatt, 1984; iSpot; www.redlist.sanbi.org).