Home » GENERA D-F » Drimia » Drimia virens flower and buds
Back to Category Overview
Total images in all categories: 8,984
Total number of hits on all images: 3,986,202 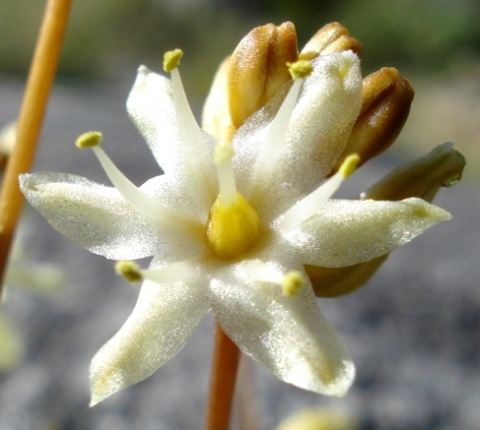 The flowers of Drimia virens are produced in a short raceme on a long, fleshy, red-brown scape. Only one or two flowers are open at a given time, the closed buds in waiting pale brown and ovoid, similarly coloured as the scape. The youngest buds are not stalked yet as they will be when open; they do not nod on the plant in the photo.

The six tepals forming the corolla are fused in their lower parts for less than half their length, while spreading widely into a star-shape when open. Flower colour is white here, on some plants pale buff. The lateral tepal parts are thinly textured and tend to sag lower than the central axis of the tepal.

The bracts at the pedicel base of Drimia species have spurred appendages low down in the raceme, sometimes longer than the bract itself; these appendages tend to diminish and disappear up the raceme.

The six fleshy stamen filaments spread widely, curving in slightly, topped by oblong anthers, greenish yellow in the photo. The superior ovary is prominent in the flower centre, yellow and tapering to its top where the straight white style ends in a small stigma.

The seeds are black (www.pacificbulbsociety.org; iSpot).