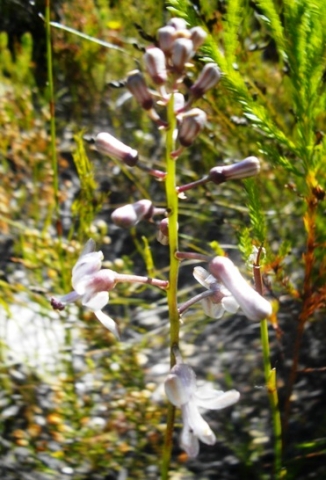 Drimia media, one of the Drimia species known in Afrikaans as jeukbol (itch bulb), is a geophyte with a large bulb. It grows a tuft of about ten rigid, nearly cylindrical leaves that are present at flowering and close to being evergreen.

The flowering stem becomes up to 50 cm in height, about double the length of the leaves. The lax raceme of small, narrow flowers has a green stalk, the individual flower pedicels red to dark purple. The silvery white inner tepal surfaces on the flowers have dark brown lines down the centre on the outer surfaces, partly hidden in open flowers where the tepals recurve strongly. The anthers are blue or purple. Withered flowers close again after their day-long flourish, having but a small window of pollination opportunities. Flowering occurs from midsummer to early winter, mostly in the first season(s) after a fire.

This is a coastal species, growing in sandy soil from Saldanha to Knysna (Bean and Johns, 2005).