Home » TYPES » Bulbs » Dipcadi marlothii flower
Back to Category Overview
Total images in all categories: 11,417
Total number of hits on all images: 6,197,969 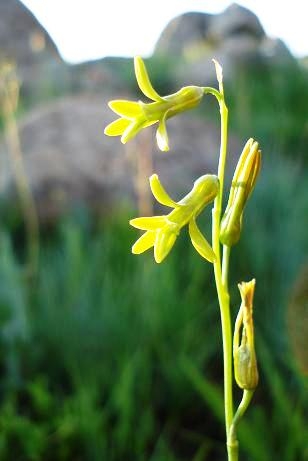 Dipcadi marlothii is a perennial geophyte reaching 1 m in height. The leaves are basal, grass-like and spirally twisted in their upper parts. Short white hairs are present on the margins and at the base of the outer leaves.

The flowers nod on green pedicels spaced sparsely in the raceme that droops in bud. The secund flowers tend to one side of the stem. Withered flowers lower down in the raceme already turn upwards as the ovaries mature into fruits.

The plant in picture bears small yellow flowers with some green on the outside of the corolla. Other flower colours include lime green and brown with cream on the inside. The outer three tepals spread, the inner three cohere in a tube. The tepals are long and narrowly oblong with rounded tips.

D. marlothii occurs widespread in the northeast of South Africa and Zimbabwe. The solitary plants are found in grassland. The species is not considered to be threatened in its habitat early in the twenty first century (Van Wyk and Malan, 1997; www.rareplants.co.uk; http://redlist.sanbi.org).