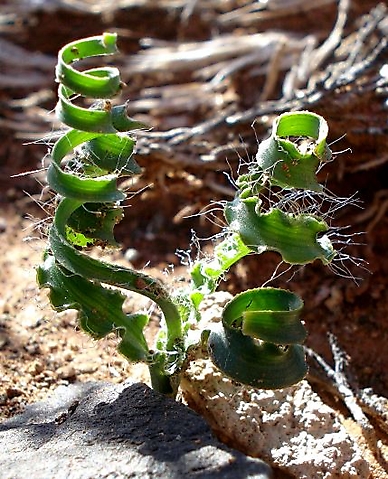 Dipcadi crispum, in Afrikaans commonly known as the krului (curl onion), is a perennial deciduous geophyte reaching heights around 30 cm.

The coiled leaves have margins that are sometimes wavy and often crisped, usually ciliate; the hairs in picture long and whitish. The leaf-tips are sometimes acutely pointed, in picture rounded.

The flowers are brown to orange. Flowering happens from late autumn to after midwinter.

The species distribution is in the north of the Western Cape and the Northern Cape, possibly in Namibia. Known particularly around Clanwilliam, the plants grow in karoid winter rainfall conditions on stony slopes and flats. The species is not considered to be threatened in its habitat early in the twenty first century.

The bulbs and leaves of some dipcadis are eaten by people, while some are noted to be poisonous. Hungry hunter-gatherers lived (and live) in a world that is dangerous in many ways, no less today than in the past. Whether D. crispum features in either category is unknown (Grenier, 2019; Bond and Goldblatt, 1984; Fox and Norwood Young, 1982; http://redlist.sanbi.org).