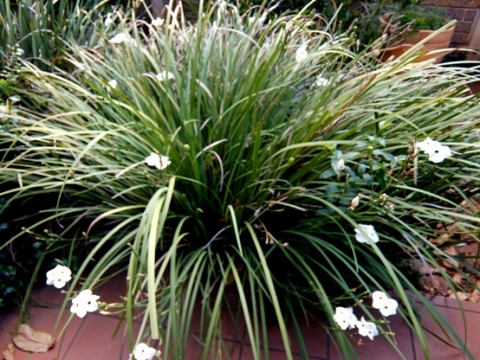 Dietes bicolor, commonly known as the peacock flower, is a rhizomatous perennial that grows into a large clump. The plants become up to 1,2 m tall; a mature plant may spread to 1 m in diameter.

The leaves are long, thin and sword-shaped, only up to 2 cm wide and acutely pointed. Leaf texture is tough, a double vein longitudinally along its centre.

The Dietes genus comprises five South African species and one on Lord Howe Island, north-east of Australia; a curious spread for the members of one plant genus. Maybe the continental drift involving the supercontinent, Gondwanaland, had something to do with this.

Dietes is closely related to two other Iridaceae genera, viz. Iris and Moraea: The short creeping rhizomes resemble those of Iris plants, while the flowers remind of those of some Moraea species (that grow from cormous rootstocks).

D. bicolor grows on streambanks and in marshy areas of the Eastern Cape from East London to Grahamstown. This is a rare species in nature, although it is widely cultivated, often seen in South African parks and gardens.

The species had been exported to European gardens, albeit probably not commercially, from before South African gold and diamonds were discovered (Pooley, 1998; Duncan, 2010; www.redlist.sanbi.org).