Home » TYPES » Bulbs » Dierama pendulum flowers
Back to Category Overview
Total images in all categories: 11,769
Total number of hits on all images: 6,918,916 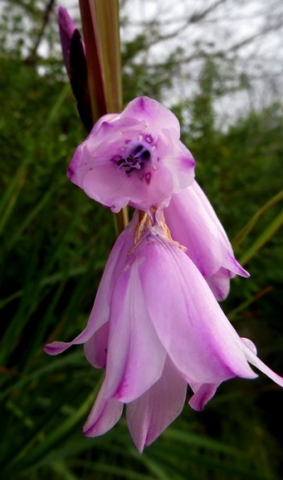 Dierama pendulum flower colour varies in shades of pink to white. The corolla is radially symmetric and bell-shaped, unscented but nectar-bearing.

There are dark markings near the tepal bases inside the perianth, bigger ones on the (inside of the) outer three tepals, displaying as ringed white patches. Darker tepal tips are also visible in the photo, continuing in short lines on the upper tepals.

The stamens and style are shorter than the tepals, but much space for pollinator manoeuvring is available inside the funnel-shaped flower. The generic name, Dierama, is the Greek word for funnel, referring to the perianth or corolla shape.

The fruit is an about spherical capsule that bears many small seeds, brown in colour and angular in shape (Leistner, (Ed.), 2000; Gledhill, 1981; iNaturalist; Wikipedia).