Home » TYPES » Bulbs » Dierama pendulum
Back to Category Overview
Total images in all categories: 11,538
Total number of hits on all images: 6,617,258 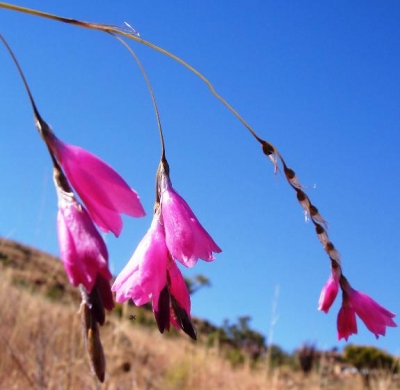 Its leaves are long (90 cm), erect and sword-shaped to linear without a midrib. The nodding, pink flowers grow in an arching spike. The occasional white-flowering plant is seen. The flower becomes about 4 cm long. It is pollinated by bees.

The species is found in the Eastern Cape and the coastal eastern part of the Western Cape, from around Knysna to the Amatola Mountains and East London.

The habitat is grassy slopes and flats in stony or marshy ground. It is not considered to be threatened in its habitat early in the twenty first century.

The Dierama genus has forty species in South Africa and four north of the border in Africa. The strongest representation of the genus is in KwaZulu-Natal (http://pza.sanbi.org; http://redlist.sanbi.org).