Home » TYPES » Bulbs » Dierama dracomontanum
Back to Category Overview
Total images in all categories: 11,769
Total number of hits on all images: 6,918,907 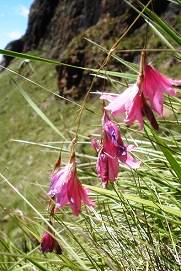 Dierama dracomontanum grows in the Drakensberg as the specific name indicates. The majority of the 44 species of this genus is endemic and variously distributed across the eastern grasslands of South Africa.

D. dracomontanum flowers may be dominant on some slopes of its habitat from late spring through summer. The plant occasionally becomes 1 m tall, but is often less than half that. It grows a wiry flower stem annually from a perennial corm. The sword-shaped leaves are long and narrow, grass-like.

The plant is grown from corms or seed and is common in horticulture (www.rareplants.co.uk; www.pacificbulbsociety.org).