Home » TYPES » Bulbs » Daubenya zeyheri flower
Back to Category Overview
Total images in all categories: 11,769
Total number of hits on all images: 6,918,754 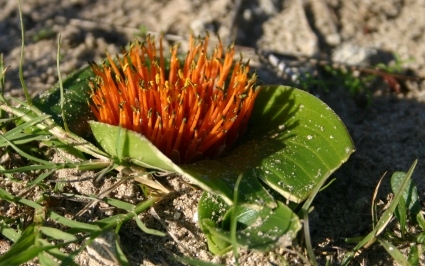 Daubenya zeyheri has a multicoloured flower if you can get close enough to note the detail. In this picture one can only see the red filaments and some old anthers. From above (and close-up), the small white petals and the bluish ovary are visible. In a younger flower the anthers are yellow, laden with pollen.

South Africa has about eight Daubenya species, including D. alba, D. aurea, D. capensis and D. comata. Late in the twentieth century it was thought that Daubenya is a monotypic genus. Some of them are today cultivated widely in the horticultural world.

This photo was taken in the West Coast National Park near Saldanha (Riley, 1963).