Home » TYPES » Bulbs » Cyrtanthus obliquus flower
Back to Category Overview
Total images in all categories: 11,662
Total number of hits on all images: 6,774,714 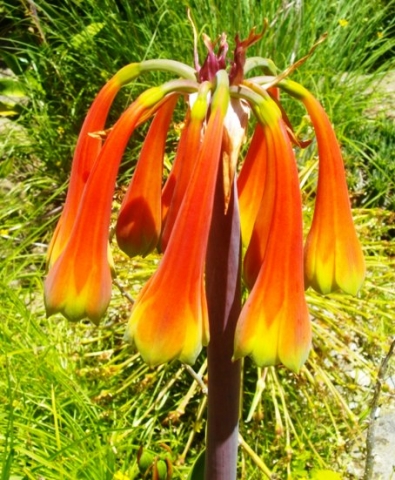 Cyrtanthus obliquus has a large, fleshy, onion-like bulb. The leaves are twisted, strap-like and deciduous. The leafless flower stem or scape is strong, hollow and erect, reaching about 60 cm in height.

The flowers are pendulous and funnel-shaped on bent pedicels. They are red or orange-red in colour, rarely yellow. The corolla is yellow close to the tip, green right on the edge. Blooming happens in spring and summer, sometimes extended into autumn.

The species distribution is in the Eastern Cape and KwaZulu-Natal.

The plant grows in coastal and Midlands grassland and under scrub on rocky slopes in conditions that differ widely in exposure to heat and drought. The form of the leaves varies in these conditions, being shorter and more twisted in drier environments. The species is not considered to be threatened in its habitat early in the twenty first century (Bond and Goldblatt, 1984; Gledhill, 1981; www.plantzafrica.com; http://redlist.sanbi.org).