Home » TYPES » Bulbs » Cyrtanthus leucanthus
Back to Category Overview
Total images in all categories: 11,662
Total number of hits on all images: 6,774,703 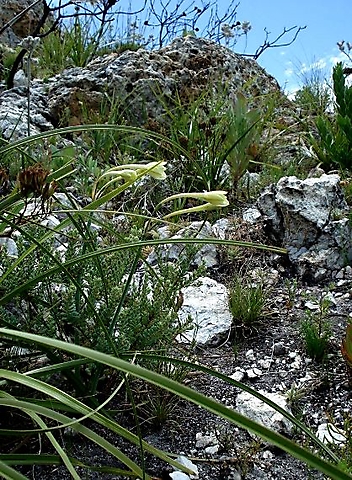 Cyrtanthus leucanthus, commonly known in Afrikaans as the witbergpypie (little white mountain pipe), is a bulbous perennial growing a flower stalk up to 25 cm tall.

The linear leaves are 15 cm long and 1 mm wide, over half as long as the inflorescence. They only appear when flowering is over.

The species distribution is along the south coast of the Western Cape from Rooiels to Potberg, common near Caledon and in Walker Bay.

The plants grow on sandy and rocky flats among sandstone fynbos and in limestone derived soils. Another Afrikaans common name, witbrandlelie (white burn lily) refers to the fact that the plants flower almost exclusively in the first season after fire. The species is considered to be threatened in its habitat early in the twenty first century, due to coastal development and alien plant invasion (Bean and Johns, 2005; Mustart, et al, 1997; http://redlist.sanbi.org).