Home » TYPES » Bulbs » Cyrtanthus epiphyticus
Back to Category Overview
Total images in all categories: 11,662
Total number of hits on all images: 6,774,725 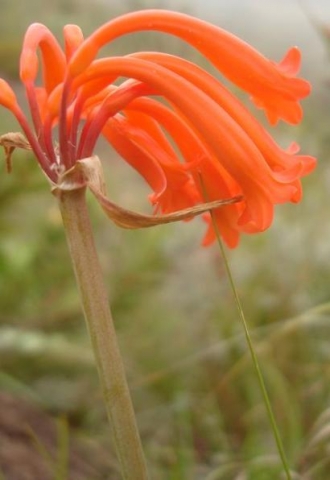 Cyrtanthus epiphyticus, commonly known as the tree lily or hanging cyrtanthus, produces flat leaves tapering at both ends. Leaf dimensions are about 40 cm long and 15 cm wide, concurrent with flowering.

The species distribution is in the east of the Western Cape, across the Eastern Cape and KwaZulu-Natal to the south of Mpumalanga; also found in Lesotho and Swaziland. The epiphytic plants, meaning that they don't require soil to grow in, are found on boulders, in rock crevices and on trees in moist places. The species is not considered to be threatened in its habitat early in the twenty first century.

The over 50 South African Cyrtanthus species range from deciduous to evergreen, winter to summer growing and their habitats from wet to semi-arid. Some Cyrtanthus species are easy to grow (Pooley, 1998; http://redlist.sanbi.org).