Home » TYPES » Bulbs » Cyrtanthus elatus
Back to Category Overview
Total images in all categories: 12,068
Total number of hits on all images: 7,360,762 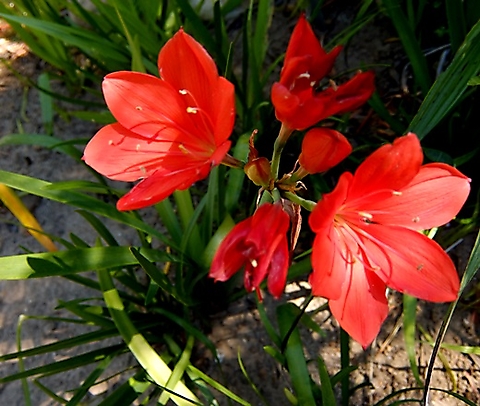 Cyrtanthus elatus is commonly known as the George lily, Knysna lily or Scarborough lily, in Afrikaans the berglelie (mountain lily) and scientifically previously C. purpureus and Vallota speciosa respectively. It is a bulbous perennial, a summer-growing evergreen that reaches heights from 42 cm to 65 cm.

The specific name, elatus, is a Latin word meaning tall. A few other Cyrtanthus species may match C. elatus in height, like C. angustifolius and C. fergusoniae, while C. obliquus may grow taller.

The ovoid bulb of C. elatus reaches up to 6 cm in diameter. It is underground or partly visible above-ground, covered in papery, pale brown tunic layers. The tunic extends into a neck of up to 4 cm at the top. The plant forms clumps.

The species distribution is coastal in the southern Cape, in the east of the Western Cape and the west of the Eastern Cape from Mossel Bay to Humansdorp.

The habitat is moist, upper mountain slopes in fynbos and forest margins. The species is not considered to be threatened in its habitat early in the twenty first century.

There is another Cyrtanthus probably more deserving of the common name berglelie, viz. C. montanus found in the Eastern Cape, particularly the Baviaanskloof Mountains.