Home » TYPES » Bulbs » Cyrtanthus elatus flower
Back to Category Overview
Total images in all categories: 11,523
Total number of hits on all images: 6,599,506 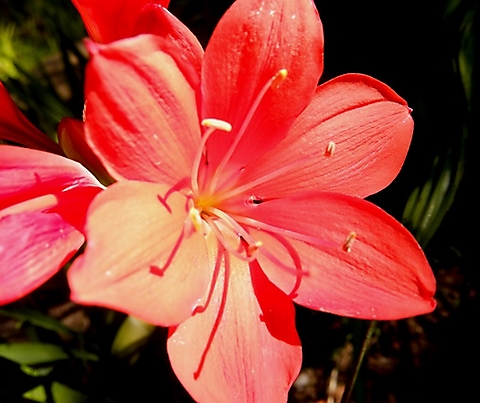 The large flowers of Cyrtanthus elatus are deep red, scarlet, sometimes pink or white. They  grow in an umbel on a sturdy, naked scape from 38 cm to 61 cm long. The erect scape or peduncle is hollow and pale green. There are two persistent, pale brown spathe bracts at the scape tip that enveloped the flowers during the bud stage.

From two to ten flowers form one inflorescence. Two inflorescences may be produced by one bulb in a season. The pale green pedicels of the individual flowers are from 2,5 cm to 6 cm long.

The widely funnel-shaped flowers are bilaterally symmetrical or zygomorphic, the six tepals obovate in shape. The six stamens are shorter than the tepals, while the curved style is slightly exserted, its stigma capitate, a compact head. The inferior ovary is ellipsoid and green. The unscented flowers produce nectar.