Home » TYPES » Bulbs » Cyrtanthus brachyscyphus
Back to Category Overview
Total images in all categories: 11,769
Total number of hits on all images: 6,918,799 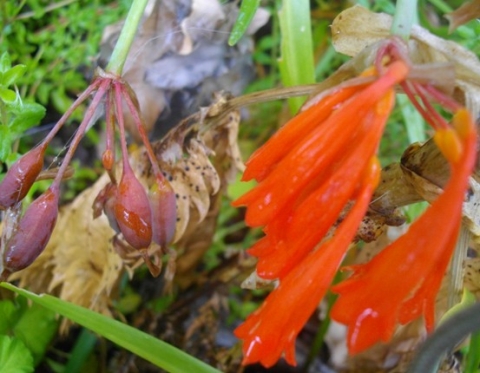 The leaves appear concurrently with the flowers. They are strap-shaped, about 5 mm wide.

The flowers are smaller than on some of the more spectacular Cyrtanthus relatives, but the plant makes up for that by being easy to grow. The flower tubes widen slightly to their mouths. The perianths are about 4,5 cm long.

The pointed corolla lobes in picture form a zigzag pattern. Blooming happens through spring and summer. The purple, ripening fruits are ellipsoid.

The species distribution is in southern KwaZulu-Natal or the east of the Eastern Cape.

Dodo lilies grow in summer rainfall moist grasslands or along streambanks. The species is not considered to be threatened in its habitat early in the twenty first century (Gledhill, 1981; www.pacificbulbsociety.org; http://redlist.sanbi.org).