Home » TYPES » Bulbs » Cyanella orchidiformis plant
Back to Category Overview
Total images in all categories: 9,840
Total number of hits on all images: 4,461,776 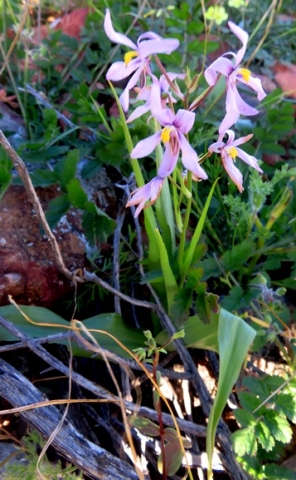 This Cyanella orchidiformis inflorescence beats the tallest of the inner, acutely pointed leaves in height but not by much.

A long, narrow, pale green bract is visible next to each visible pedicel. The six tepals of the flower perianth are free; the inner three using their freedom to lean forward, while at least the uppermost one of the outer whorl bends back strongly in its centre. The dark line markings at the tepal bases common to these flowers are visible in the photo.

There are six stamens, yellow on short white filaments fused at the base. The lower anthers are bigger. In picture they bend down halfway along their length. The ovary is half inferior, referring to its position in the flower, not a slur on its character (Manning, 2007; Leistner, (Ed.), 2000; iNaturalist).