Home » TYPES » Bulbs » Cyanella orchidiformis
Back to Category Overview
Total images in all categories: 8,946
Total number of hits on all images: 3,964,818 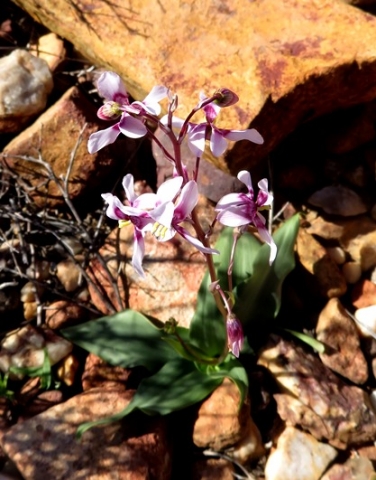 Cyanella orchidiformis, commonly known in Afrikaans as the wilderaap (wild turnip) or raaptol (turnip top), is a deciduous perennial reaching 40 cm when in flower. The raap or turnip names refer to the deep-seated, long-necked and edible corm covered in a fibrous tunic.

The species resides in the west of the country and southern Namibia, from Clanwilliam through Namaqualand and the Richtersveld. The photo was taken at Naries, west of Springbok.

The habitat is dry fynbos and karoid scrub on rocky flats and lower slopes, often near moisture but also in dry places. The species is not considered to be threatened in its habitat early in the twenty first century (Manning, 2007; Le Roux, et al, 2005; Manning and Goldblatt, 1997; Eliovson, 1990; iNaturalist; http://redlist.sanbi.org).