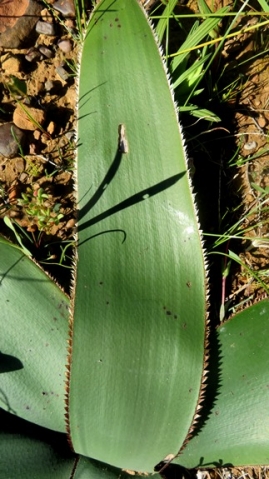 Four to six Crossyne flava leaves grow opposite and flat on the ground, prostrate or spreading.

The leaves are broad, long and flat; strap-shaped with rounded tips. The leaf-shape tends slightly away from symmetrical, the tip veering to one side, compensated for by a mild bulge lower down on the other.

Faint, longitudinal lines cover the smooth surface that is dully dark green with a hint of shine. The lower surface is marked with angular red spots. Leaf dimensions are 20 cm to 43 cm long and 5 cm to 12 cm wide.

The slightly raised margins are conspicuously fringed with bristly hairs, pale brown, yellow or whitish in colour. Part of the lower margin in picture is reddish brown.

It is the marginal hairiness that distinguishes the leaves from other Amaryllidaceae leaves, particularly those of Brunsvigia. Several Brunsvigia species also produce four to six strap-shaped leaves flat on the ground, like B. bosmaniae growing in roughly the same region and B. radulosa of the eastern part of the country.

Some brunsvigias, like B. bosmaniae also have leaves when there are no flowers as does C. flava. B. marginata leaves have red, cartilaginous margins that are slightly toothed and B. elandsmontana has reddish-pink leaf margins, slightly crisped. Others, like B. grandiflora of the Eastern Cape have wavy margins, but none of them have bristles seen here (Duncan, et al, 2016; Le Roux, et al, 2005; iNaturalist).