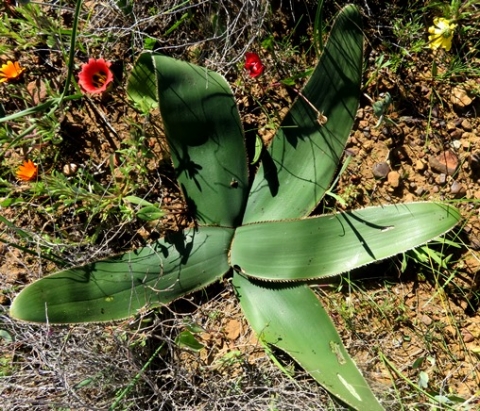 Crossyne flava, commonly the parasol lily, is a deciduous geophyte growing up to 50 cm in height from a laterally compressed or ovoid bulb. The bulb varies in width from 9 cm to 13 cm. It is covered in several layers of a pale brown tunic that reaches the bulb’s prominent underground neck displaying transverse bands. This neck becomes from 2 cm to 4,5 cm long, .

The species is distributed in the west of the Northern Cape and the Western Cape, particularly Namaqualand and the Cederberg. These leaves were photographed in August at Matjiesfontein, a flower farm near Nieuwoudtville.

The habitat is winter rainfall flats where the plants grow in heavy loam soils derived from sandstone or granite. The species is not considered to be threatened in its habitat early in the twenty first century.

There are only two species in the South African endemic Crossyne genus, part of the Amaryllidaceae family. The other one, C. guttata with dark marginal hairs on the leaves, grows in the Western Cape (Duncan, et al, 2016; Le Roux, et al, 2005; iNaturalist; http://redlist.sanbi.org).