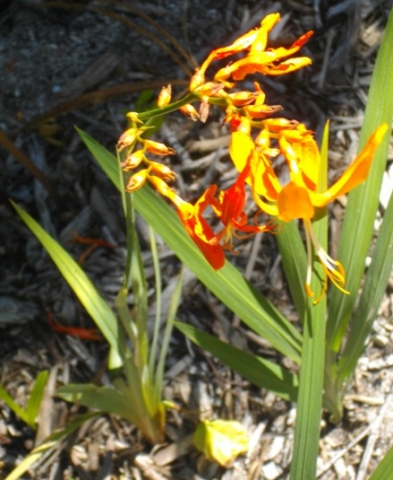 Crocosmia aurea, commonly known as falling stars, montbretia or in Afrikaans valentynblom (Valentine flower), is a perennial geophyte growing from a corm to between 40 cm and 130 cm in height, forming colonies. The soft leaves are linear to lanceolate and up to 3 cm wide, growing in a basal fan, the midribs distinct.

The nodding orange and red flowers grow in a two-ranked spike. The flower has a curved tube up to 2 cm long, the radially symmetrical tepals spreading or recurving. Narrowly oblong, dark yellow anthers hang from the long white filaments. The style ending in three branches can be observed among the stamens in the photo.

The species distribution is in the eastern parts of the country, from Limpopo to the Eastern Cape and as far south-west as George in the southern Cape; also northwards to tropical Africa.

The habitat is forests and forest margins, sometimes in grassy clearings. Plants grow from the coast to elevations of 2000 m. The species is not considered to be threatened in its habitat early in the twenty first century (Manning, 2009; Pooley, 1998; Moriarty, 1997; iSpot; http://redlist.sanbi.org).