Home » TYPES » Bulbs » Crocosmia aurea buds growing in spikes
Back to Category Overview
Total images in all categories: 11,116
Total number of hits on all images: 5,786,927 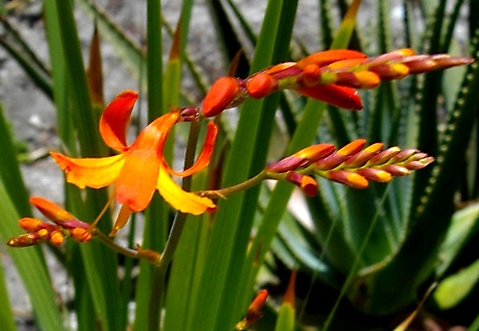 Flower spikes forming Crocosmia aurea inflorescences start off with buds ascending in two neatly compact, opposite arrays in each spike. Each bigger (lower) bud in a spike has a little more of the colouring that will make the mature flower.

The open flower in picture has more yellow on the outside surfaces of the inner whorl of tepals than on the more recurved, redder, outer ones.