Home » TYPES » Bulbs » Clivia miniata var. citrina
Back to Category Overview
Total images in all categories: 11,539
Total number of hits on all images: 6,621,959 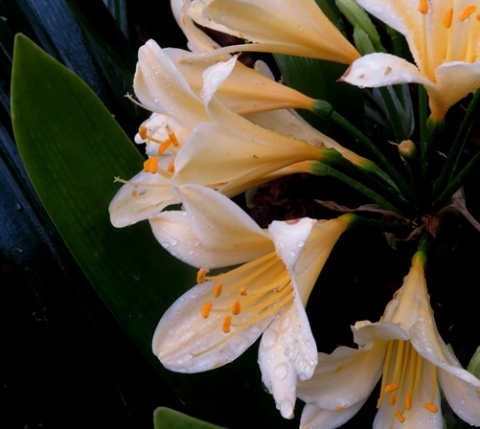 Clivia miniata var. citrina is the less common variety of C. miniata that bears cream or lemon-yellow flowers. The plants grow to heights from 50 cm to 80 cm. The underground, vertical rhizome is extended into a mat of thick, fleshy roots.

The laterally compressed scape grows adjacent to the leaves, bearing up to 30 pedicelled flowers in an umbel. The actinomorphic or radially symmetrical perianth tube is from 7 mm to 10 mm long, the tepals up to 65 mm. There may be a green median strip down the length of each tepal. The six stamens are flexed down, their pollen bright yellow.

This variety grows in KwaZulu-Natal among C. miniata var. miniata populations. It is uncertain how var. citrina is faring in nature early in the twenty first century, due to insufficient data.

Only some of the var. citrina plants bear seeds that produce yellow-flowering plants only (Duncan, et al, 2016; http://pza.sanbi.org; http://redlist.sanbi.org).