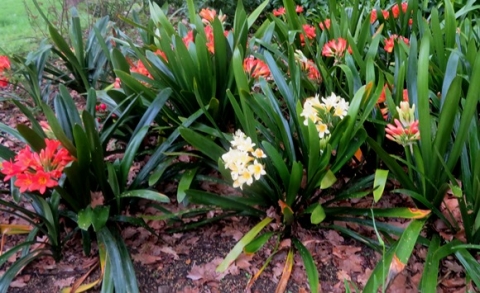 Clivia miniata is a rhizomatous perennial forming clumps and reaching heights from 50 cm to 1 m. The rhizomes are underground, aerial to a limited extent and erect, the roots thickly fleshy.

Clivia plants are evergreen and summer-growing, forming offsets. The dark-green, arched leaves are strap-shaped, up to 90 cm long and 7 cm wide. The stems present up to 30 funnel-shaped flowers above the leaves, the six perianth segments in two whorls of three, flaring to a diameter of 7 cm at their tips. Flowering happens mainly from late winter to spring.

The most common form is C. miniata var. miniata flowering orange or red. The yellow-flowering var. citrina occurs in nature among the orange-flowering plants, not on its own.

The species distribution is coastal in the Eastern Cape and KwaZulu-Natal, inland in Mpumalanga from the Kei River to Barberton, as well as in Swaziland. A small, separate population exists near George in the southern Cape.

The habitat is forest and bushy vegetation, the plants in partial shade of cool, rocky ledges and ravines. Some plants grow in tree forks as epiphytes. The species is considered to be vulnerable in its habitat early in the twenty first century. This is due to plant harvesting for medicinal purposes and horticulture, as well as habitat loss caused by commercial forest plantations, agricultural crop cultivation and urban development (Duncan, et al, 2016; Manning, 2009; http://redlist.sanbi.org).