Home » TYPES » Bulbs » Chasmanthe floribunda
Back to Category Overview
Total images in all categories: 11,538
Total number of hits on all images: 6,621,849 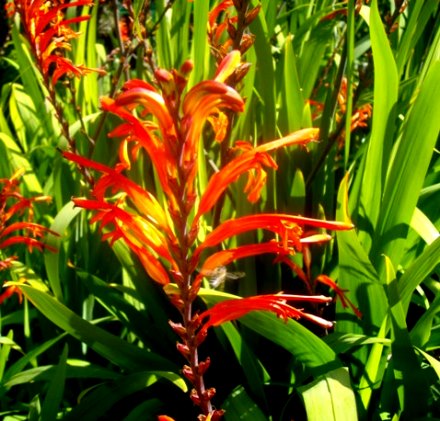 Chasmanthe floribunda is a robust, cormous perennial, the deciduous plant annually reaching heights from 45 cm to 1 m. The flattened corm in a papery to fibrous tunic roots from below.

The soft-textured, sword-shaped leaves grow in a basal fan, the lowermost ones cataphylls. The leaves have raised midribs.

The inflorescence is an erect, branched spike with small stem-leaves lower down.  Many orange, sometimes pale yellow flowers alternate up in two opposing ranks. The flowers are each subtended by two small, leathery bracts with tips that dry early.

The long, narrow and curved corolla tubes have their tepals joined before the two-lipped mouths where the dorsal tepal extends straight, about horizontally over the stamens and style, the others shorter and flaring.

The lower stamen has a longer filament than the other two, the anthers parallel. Flowering happens from midwinter to early spring. The small, brown fruit capsules are globose and leathery, the about spherical seeds red-brown.

The species is distributed in the west of the Western Cape, extending slightly into the Northern Cape. The photo was taken near Darling.

The habitat is moist flats and slopes in granite and sandstone derived soils on the coast and inland. The species is not considered to be threatened in its habitat early in the twenty first century (Manning, 2007; Leistner, (Ed.), 2000; iNaturalist; http://redlist.sanbi.org).