Home » TYPES » Bulbs » Bulbinella nutans
Back to Category Overview
Total images in all categories: 8,906
Total number of hits on all images: 3,881,299 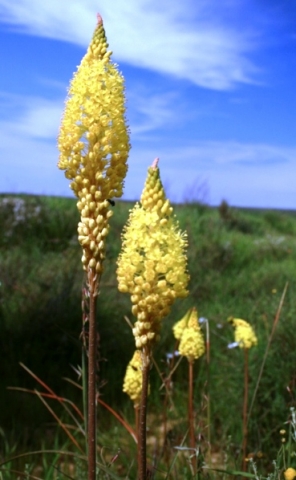 Bulbinella nutans is a perennial growing from a rhizome to 1 m in height. It bears yellow or cream flowers in a conical raceme. Fruits are forming low down in the inflorescences in picture, while buds are waiting their turn at the top, above the sections containing open flowers.

The distribution of the species is in the Western Cape and the southwest of the Northern Cape. The plants grow in damp spots in peaty soils and seasonal marshes, commonly in succulent Karoo and fynbos.

There are two subspecies, viz. subsp. nutans and subsp. turfosicola. Neither is considered to be threatened in its habitat early in the twenty first century (Manning, 2007; iNaturalist; http://redlist.sanbi.org).