Home » TYPES » Bulbs » Bulbinella divaginata
Back to Category Overview
Total images in all categories: 9,579
Total number of hits on all images: 4,304,138 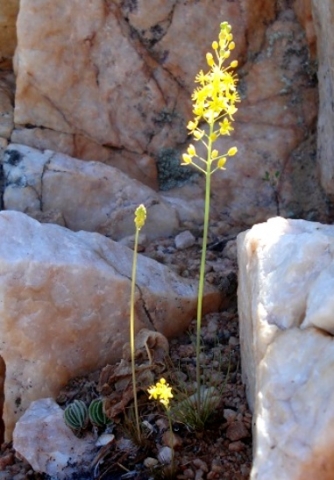 The thread-like leaves of B. divaginata grow in a tuft of up to 40 leaves, usually maturing after the autumn flowers. A membranous sheath surrounds the leaves at the base. Yellow flowers grow in a dense and narrow, cylindrical raceme that becomes about 45 cm tall. The plant in picture was seen in Namaqualand in April.

The plant is found from the Cape Peninsula along a broad swathe of land along the west coast to the Richtersveld and into Namibia.

The plants typically grow in clayey soil in renosterveld, which clearly does not occur throughout its distribution area; adaptation allows for multiple solutions. The plant shown here is thriving among quartzite. The species is not considered to be threatened in its habitat early in the twenty first century (Manning, 2007; iSpot; http://redlist.sanbi.org).