Home » TYPES » Bulbs » Bulbinella cauda-felis
Back to Category Overview
Total images in all categories: 9,840
Total number of hits on all images: 4,462,709 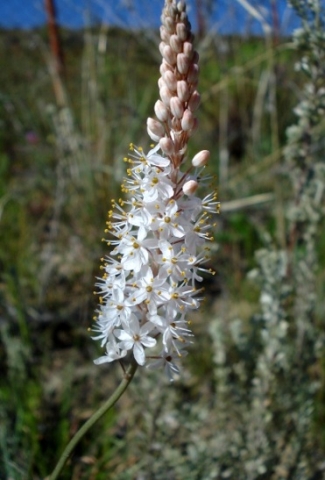 Bulbinella cauda-felis is a perennial growing a tuft of five to eleven linear, channelled, grass-like leaves.

The inflorescence is a narrowly conical raceme of white flowers from pink buds. The erect flowering stalk reaches about 80 cm in height; in tough conditions only half that. The densely flowered raceme has earned the plant a common Afrikaans name of katstert (cat’s tail). Flowering commences late in winter and carries on until midsummer.

The species distribution is widespread in the Western Cape and slightly into the south of the Northern Cape.

The habitat is sandstone, granite and clayey slopes, the plants thriving in damp conditions. The species is not considered to be threatened in its habitat early in the twenty first century (Manning, 2009; www.pacificbulbsociety.org; http://redlist.sanbi.org).