Home » TYPES » Bulbs » Crossyne guttata
Back to Category Overview
Total images in all categories: 11,112
Total number of hits on all images: 5,779,048 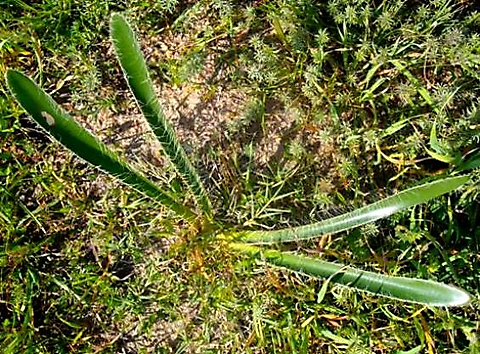 The leaves of Crossyne guttata are often broad but variable in width. Juvenile leaves are strongly channelled.

The four to six strap-shaped leaves, opposite and spreading or prostrate, have conspicuously hairy margins. These hairs may be short or long, white or various shades of brown. Hair length is up to 10 mm on young leaves, shorter by half on old ones.

The usually bright green to dark green leaves have red spots on their lower surfaces. Leaf dimensions are 16 cm to 30 cm long and 3 cm to 9 cm wide. Several Strumaria species have long hairs on strap-shaped leaves but they occur on the blades, not restricted to the margins.

This plant was seen in the Tinie Versfeld Wildflower Reserve at the end of August. This is the end of the C. guttata season for leaves that started in late autumn and die back at the onset of the warm, dry season.

Flowering happens from late summer to after mid-autumn, usually after fire when there are no green leaves present, the dry ones burnt. The inflorescence is a many-flowered, rounded head, the small pink to maroon flowers funnel-shaped.

The species is endemic to the south and southwest of the Western Cape. The plants are found in colonies on shale and granite flats and slopes. The species is not considered to be threatened in its habitat early in the twenty first century (Duncan, et al, 2016; Manning, 2007; iNaturalist; http://redlist.sanbi.org).