Home » TYPES » Bulbs » Boophone disticha heads that wouldn't roll
Back to Category Overview
Total images in all categories: 11,506
Total number of hits on all images: 6,493,707 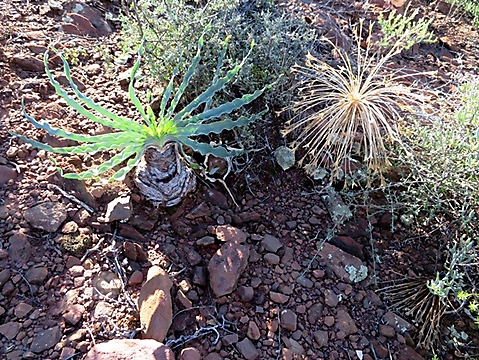 The popular dispersal story has it that the old, dry Boophone disticha inflorescence, severed from the plant when the seeds are ripe, rolls away in the veld, dropping seeds everywhere the wind takes it. The umbel-shaped fruit head is tossed, heaved and dropped by the gusts, every jolt shaking more seeds from the open capsules angled opportunely at every particular moment on this rough and tumble journey.

The diversity of the individual seed landing spots is supposed to ensure good growth outcomes for some at least, or so the story goes.

The photo tells another story: In spite of strong winds common during several seasons in this typical Little Karoo environment, two old fruit heads of the B. disticha bulb are still lying right next to it, travelled nowhere. The older one already for about two years or so. Small colonies of same species plants that keep each other company also occur in nature.

Stories have different endings. That’s why kids listen again and again, sometimes complaining about deviations introduced. Is this how they acquire the needed intuition about life’s surprises?

The rigidly fixed version of the story is not wrong, but sometimes there’s no wind, or the branches of the next-door plant grabs a capsule, preventing departure. Or something else happened here, denying the fruit heads their romantic excursions.

Nature has its rules and applies them in accordance with the laws of physics and more laws of its own. But many different real world outcomes happen in the micro-situations of existence everywhere, always dependent upon the strongest influences brought to bear at the particular time and place.