Home » TYPES » Bulbs » Boophone disticha
Back to Category Overview
Total images in all categories: 11,124
Total number of hits on all images: 5,797,935 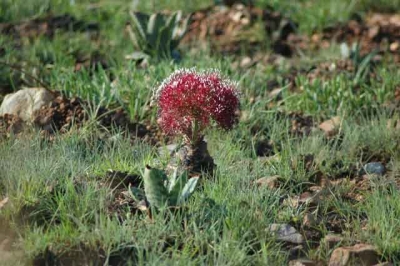 Boophone disticha, the sore-eye flower or in Afrikaans gifbol (poison bulb), produces a dense cluster of red and pink flowers. The inflorescence appears from spring to autumn on a sturdy flower stalk from a large bulb. The bulb wears a thick tunic layered of thin, papery scales. The top part of the bulb is usually visible above-ground.

The flower stalks become longer after flowering while the seeds are forming. At the end of the flowering season the round, dried out remains of the flowerhead often breaks off and distributes the seeds as it rolls, wind-driven over the veld in tumbleweed fashion.

The distribution of the gifbol ranges from the southern coastline to tropical Africa, recorded in all nine South African provinces.

The habitat is diverse, often in rocky places, grassland to scrub and fynbos in loamy or clay soils. In spite of traditional medicine harvesting of the bulbs, the species is not considered to be threatened in its habitat early in the twenty first century.

Although the plant bears the Afrikaans name of gifbol (poison bulb) and may cause sore eyes in humans through accidental contact, it is widely used in traditional medicine (Vlok and Schutte-Vlok, 2010; Van Wyk and Malan, 1997; Germishuizen and Fabian, 1982; http://redlist.sanbi.org).