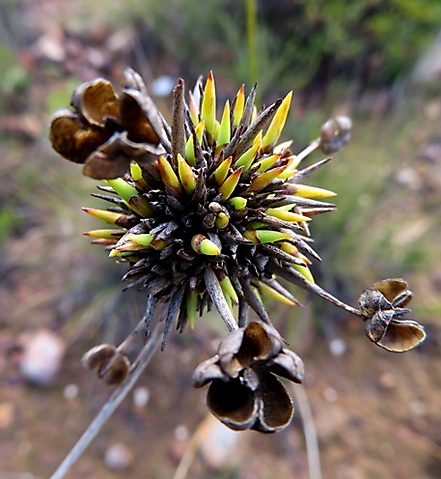 Bobartia orientalis subsp. orientalis flowers grow in a compact cluster of zigzagging cymes called rhipidia. The inflorescence is positioned at the tip of a long stem looking much like a leaf. Two long spathes subtend the inflorescence, thinly furled once dry and protruding well beyond the flowers or fruits.

After flowering the two green spathes subtending each flower, the inner one longer, form a narrow cone. The fruit appears at its tip if pollination and related development succeeded.

In picture, the few developed fruit among many spike-like, narrow green cones have ripened and dehisced already, their seeds dispersed. The pedicel of the woody fruit is by this time quite long, the segments of the husk gaping, grey outside and brown within.

Earlier, its body was green when the seeds formed in the three locules of the inferior ovary, positioned below petals and anthers in the yellow flower (Manning, 2007; Bond and Goldblatt, 1984; Gledhill, 1981; iNaturalist).